With a baby on the way, and a house purchase in the works, I'm pretty busy at the minute. Not crazy busy, but it's rare I have a day (and in most cases, even an evening) to myself. It's times like these I wonder how I'm ever going to become insanely rich, and also how i'm going to make time to play all the MMO games I want to play without annoying my wife too much.

World of Warcraft sucked up much of '06, '07 and '08. Planetside did for 2003-2005. Asheron's Call saw in the century, and that was a lot of fun too. I've spent literally years of my life competing with other real people in virtual environments to achieve fake fortunes and accomplishments. It may seem sad, and it may have been a huge waste of time, but boy was it fun.

I'm wondering how applicable those skills i've learned are to the real world. I know first hand that the leadership experience I gained from ordering around 30 people every evening for two years was actually very valuable. The persuasion, snap decision making, strategic and tactical evaluation skills from Planetside actually translated incredibly well to leading teams of people in a business - obviously there's huge differences, but trying to keep a cohesive group of disparate personalities together and focused on a single objective (or set of complementary objectives) with tight timescales is pretty much half of my job these days.

In terms of translating fake economic skills (WoW auctioneering, crafting etc) into real world practice, I think the theory is good. Obviously there's a huge gap between theory and practice, but I have a feeling that when I finally put some effort into applying those lessons to real world economic models, there won't be a massive learning curve to deal with.

To that end, I'm about to start running some financial modelling. If anyone wants to get in on the fun, mail me. It doesn't get much more massively multiplayer than the real world, after all.
Posted by Tim Swan at 5:52 AM 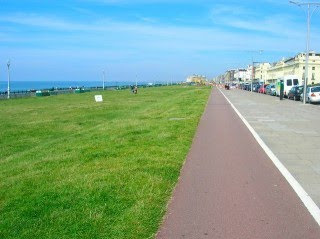 I ride into and out of work most days. Boy, do those pedestrians get my goat when they walk on the cycle path. Even though it has pictures of bicycles on it every few yards, and it's bright red, some people insist on walking on it. I always assumed it was pretty damn obvious that you shouldn't be there if you are not travelling on a bike.

Today tho, I saw some chinese folks wandering down it, and I came to wonder ... maybe they think it's a lucky red path, just for them?