Fixing the heating, upgrading to a Nest

My wonderful homeland had a huge dump of snow last week, and then a fast thaw over the weekend, leading to all sorts of shenanigans, mainly involving burst pipes and the like. It's eye-opening to see what living without water is like, even for a few hours - no flushing loo, no washing clothes or utensils, no shower - it's like living in the stone age, or some blighted third world location. It certainly makes you realise how horrific it must be to live somewhere that's had decent utilities (power, water, internet) and then have it taken away from you. My heart goes out to everyone living in that situation.

Another side effect of the weather was a slew of issues with our central heating at home. Due to some leaks and a bad expansion valve, our heating system is incredibly temperamental at the best of times - the pressure drops to zero, I have to add water to get the pump working, then the pressure goes up and the safety valve kicks in, unless I nurse it very carefully.


The cold snap meant we needed the heating on pretty much constantly, which has evidently put strain on all the components, culminating in our wall thermostat giving up the ghost. It was a Potterton PRT2, which is old enough that it's discontinued and marked obsolete pretty much everywhere - it doesn't even show up on the Potterton website, which is just awesome (and why the above link goes to a retail site). 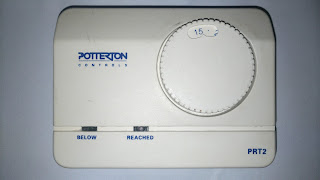 It was functional (before) - it certainly isn't any more. For a few days, the temperature didn't remotely reflect the real world, and then finally it decided it was going to stay on "below" unless I turned it down to 5 degrees, and even then it kicked in every now and again.

This caused the pressure to spike, as the heating was on constantly, our house became comfortably warm, then ridiculously warm, and finally we'd had enough.


I've had a Gen 1 Nest Thermostat sitting in a box for ages, waiting to be fitted. I'd examined the instructions numerous times, but the Heat Link portion of the Nest was scaring me - inside the box were connections for 7 wires, and I understood four of them but was a bit vague on the other three. I had looked behind the Potterton thermostat previously, and seen that there were three wires going from the wall into the box, and that didn't appear to be enough wires to drive the Nest Heat Link. So, in the box it stayed (for more than a year).

After the PRT2 started to get flakey, I decided to order a pretty cheap replacement - nothing fancy, just a dial and a temperature gauge, as well as an indicator light showing if the boiler was expected to be working or not. With all the other issues in the heating system, having an indicator to show state is critical for debugging the system!

I settled on the Heatmiser DS1-L which was about £25 on Amazon. It arrived a couple of days later, the day after the PRT2 completely gave up the ghost. I took a quick read of the instructions, turned off the power, and got stuck in.


Off with the old, on with the new 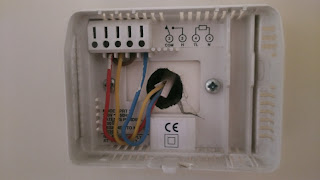 Here's the wiring inside the Potterton PRT2. Three wires coming from the boiler - Live (red), Neutral (blue) and Switched Live (yellow) - sometimes referred to as Call For Heat or Boiler Live.

You'll also see a tiny stretch of brown wire, bridging from the Live in terminal 4 to Common in terminal 2. For maximum correctness, the red wire really should be going into terminal 4, and then bridging to terminal 2 over the brown wire. I'll come back to this in a minute.

And here's the Heatmiser DS1-L with the same wires connected.

The Heatmiser can work two ways - with 230+ Volt switching, or "Volt Free" switching. The former uses the live line to provide the switching signal, and the latter uses a different line (with a much lower voltage, e.g. 12 volts) to provide the switching signal, presumably with a relay or something to bridge the two. Because I've only got three wires, I went with the reasonable assumption that I should wire this thing in 230+ Volt mode, so I pinched the brown wire from the PRT2 and wired everything in as you see above.

Once the wires were done, I screwed it all together, turned the power on; et voila! a working, accurate, thermostat! 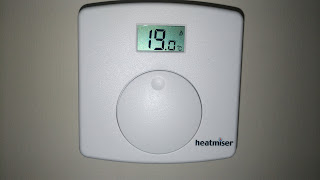 It was around this point (just after the radiators finally got warm) that a slow realisation dawned on me. The Nest Heat Link - that needed four wires, didn't it? but maybe it could work with three and a bridge wire.

And indeed, in the manual, there's a paragraph describing just that:

"If existing controls operate at mains voltage, you can add a jumper cable between live and common. The jumper cable should be 0.75mm2 and 55mm long (with 8mm of exposed cable at each end)."

I'd totally missed the relevance of this the first three or four times I read the installation instructions. Oh well! So, that meant I should be able to simply replace the thermostat with the Heat Link box. 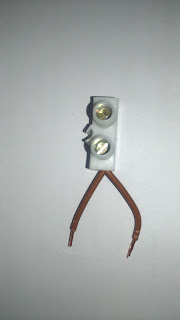 The first issue I came across was that the wiring holes for the nest are really small - barely large enough for the single-core copper in my heavy duty spare wire, and definitely not large enough to fit a jumper wire and the live wire into a single hole - so I crafted a single-to-double splitter with some spare wire and a cable connector, turned the power back off, and got to work for a second time.

Here's the wires all attached inside the Nest Heat Link. The thermostat wire (the right two connections) is some temporary cable I was using to check the whole shebang was functioning properly. 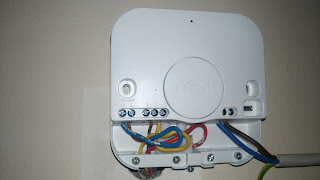 You can see Neutral (blue) in terminal N, one of the two Live wires in terminal L, the "Satisfied" terminal (1) is empty, the "Common" terminal (2) is the second Live wire, and the "Call For Heat" terminal (3) contains the yellow wire.

The remaining two terminals on the right are the 12v connection between the Heat Link box and the Thermostat puck. You can connect the two wirelessly, but if you do that you need to provide power to the Thermostat puck over a USB cable. I debated for a while as to where I actually want to put the Thermostat, and finally decided that the best place for it was probably where we had the PRT2 anyway. So, I ran a tiny portion of cable connecting the two boxes. The Thermostat puck has a backing device that has both a USB charging port and two terminals for the other end of the connecting wire. If it's wired to the Heat Link, it charges over that connection, so no USB connection is required.

I originally sited the puck on the provided mounting plate, but it looked a bit rubbish - I think having the circle of the thermostat is a much nicer look on the wall. 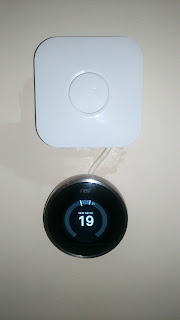 Power on, and a bit of tidying up - and it works! It's great to be able to trust the temperature sensor, although we've been used to the old "18 degrees" which was probably closer to 22 or 23. I wish I'd sanity-checked the old thermostat temperature before it decided to die on us.

Is the Nest any good?

We've only had it running for a day or two now, but I really love how we can control the temperature overnight, when we're out of the house, and use the phone to adjust things. I also like the look of all the smarts in the system (true radiant, scheduling, that sort of thing). I don't have any other Nest products, so I don't know whether the ecosystem as a whole is worth diving in to - and I probably won't need anything other than this particular device. So far, though - two thumbs up from me.